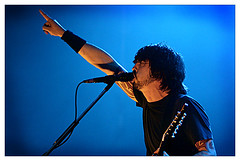 I would feel remiss to go without mentioning the Foo Fighters right now.  Their current album is 2011’s Wasting Light which is well worth several listens and with their performance and winnings at the 2012 Grammy Awards I just have to talk about them.  They were nominated in 6 categories:  Album of the Year, Best Rock Performance, Best Hard Rock/Metal Performance, Best Rock Song, Best Rock Album and Best Long Form Music Video (for Back and Forth) and won 5 of the 6 (all but Album of the Year).

Following the death of Kurt Cobain in 1994 Dave Grohl pressed on forming the Foo Fighters with himself as the sole permanent member of the band at the time.  18 years and 11 Grammys later they’re still rocking on cranking out hit after hit.  Grohl and his mates have discovered a formula for success in modern rock and they are not shy about putting it to use on each of their studio efforts.  Fortunately for us fans that formula translates excellently into live concert energy.  I was lucky enough to see the Foo Fighters on tour when I was in college in support of One By One  and to this day that concert remains one of my favorites of all time.

If you heard Grohl’s acceptance speech for Best Rock Performance he just gets it.  Music is human.  It’s from the heart and soul.  It’s fun.  That comes though on every one of their albums and at every one of their shows, even as he’s cracking some god awful jokes in between songs.  Congratulations on the latest Grammy wins and keep it up guys, I’ll be waiting to pop the cork on the Foo Fighters 20th Anniversary two years from now!

Go give a listen to Wasting Light and see what you think.  Rock on.

Foo Fighters on the web 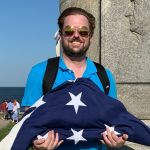 Snippets From Books I Read

"I followed shortly after, but even a long, hot shower didn’t bring on the sleep I’d really hoped for. Quite simply, I had too much on my mind. So much that it raced from one problem to another, in a vicious cycle that had me tossing and turning in between small bouts of sleep with vivid, strange dreams. I awakened feeling more tired than I had when I’d gone to bed, and that was saying a lot given the day I’d had before."— Jana Deleon


Notice: Trying to access array offset on value of type bool in /home/scriman8/public_html/wp-content/plugins/recent-tweets-widget/widget.php on line 108

cmannering
•
Follow
My sweet #AmeliaLouise wants to learn to play guitar 🎸 🙂 she is practicing frets 1, 2 and 3, 1st string tonight ❤🎵
View on Instagram |
1/9

cmannering
•
Follow
Reposted from @darnahmercieca ✋ Let this be a reminder to yourself and anyone else in your life. You are worth the effort, time, and energy. ALWAYS.
View on Instagram |
2/9

cmannering
•
Follow
Finally got to watch @Ghostbusters #GhostbustersAfterlife with the fam. I LOVED EVERY MINUTE! Excellent tribute to #HaroldRamis thank you to @therealdanaykroyd for that! And to @mckennagraceful for being an incredible actress & role model for #stemgirls Plus my oldest son @yoitsbraeden could totally be a @finnwolfhardofficial stunt double.
View on Instagram |
5/9

cmannering
•
Follow
Love yourself enough to set boundaries. your time and energy are precious. You get to choose how you use it. You teach people how to treat you by deciding what you will and won't accept. #choosejoy #chooseyou #timeisprecious
View on Instagram |
9/9
View on Instagram